Blue when output(23) voltage is below -2v, red when above +2v. Doubles as frequency/waveform indicator. Affected by level(9) setting so it will be unresponsive below a certain output level. In this case one can refer to the Gate output LED(3) for indication on the state of the current cycle.

Lights up white while output(23) voltage is positive and gate output(15) is +5v.

Controls how often the current state of the waveform(10) is sampled. All the way turned to the left(CCW) is off, then rate increases by clockwise rotation. Turning it on affects all the outputs(15, 19, 23). This rate can be controlled by the sync input(20) when the sync mode switch(4) is in the S/H or BOTH setting. To simply control it from an external clock connected to the sync input(20), set it to a slower rate than the incoming trigger rate.

allows you to shift the center point of the selected waveform(10) left or right from 12.5% up to 87.5% of the cycle duration. The noise waveform is not affected by this setting, but the random waveform(the alternative mode(11) of the noise waveform) is.

controls which waveform is output(15, 19, 23) by the module, affected by the alt toggle switch(11), note the small legend illustrating the alternative set below the knob.

Receives -5v to +5v CV which is summed with frequency knob(5) setting.

Receives -5v to +5v CV which is summed with octave switch(6) setting. This changes the range of the frequency knob(5).

Outputs a 0v to +5v square wave which goes high when LFO output is above 0v. Useful for clipping LFO output using a VCA for instance. Indicated by the gate output LED(3).

Receives a 0v to +5v square wave input to toggle between the two waveform(10) sets, bypasses the alt toggle switch(11).

Receives -5v to +5v CV which is summed with skew knob(8) setting.

Outputs -5v to +5v CV inverted with respect to normal output(2, 23). Meaning this output is the mirror image of the normal output.

Receives a 0v to +5v square wave input which triggers a reset on the rising edge. Type of reset depends on the settings of the sync mode switch(4). The sync indicator LED(1) lights up when this input senses a higher voltage.

Receives -5v to +5v CV which is summed with sync mode switch setting(4).

The core idea behind this module is all about control voltage. Hence all features are individually broken out to CV inputs, making the most use possible of the benefits of the digital wavetable oscillator. This means that the design is geared towards allowing hands-off control of all aspects and some concessions have been made to that effect.

Initial setup basically consists of connecting the power cable to the module and your bus. The cable has a slotted socket for correct orientation, but mind that the red stripe faces the white line on the edge of the pcb. The included screws are nylon in order to minimise rack-rash.

Tuning the module is possible by adjusting the small smd trim potentiometer on the back. It adjusts the offset voltage that affects the center point of the lfo oscillations. It should be close to its three o'clock position, but you can adjust it by turning the module on, reducing the output level to almost zero and turning the trim potentiometer until you find the point where the gate output led just barely turns off.

The LFO sync type is hard sync, meaning that it resets the current cycle to the beginning of the waveform. It does not control the duration of the cycles. This allows you to further shape the output to, say, three quarters of a sinewave by using external sync and adjusting the HZ knob so the duration of a cycle is just a little longer than the time between incoming sync pulses.

The CV inputs are scaled down to +-2.5v and added/subtracted with the knob setting, meaning that to sweep the full range of the parameter with CV, the knob should be in center position. The inputs are clipped to the allowed range after mixing, so you can apply any eurorack voltage here.

The module's core processor is socketed, so using a simple PIC programmer and some basic Assembly knowledge you can modify its functionality to suit your needs.

The code is written by Electric Druid who supplies me the chips preprogrammed. 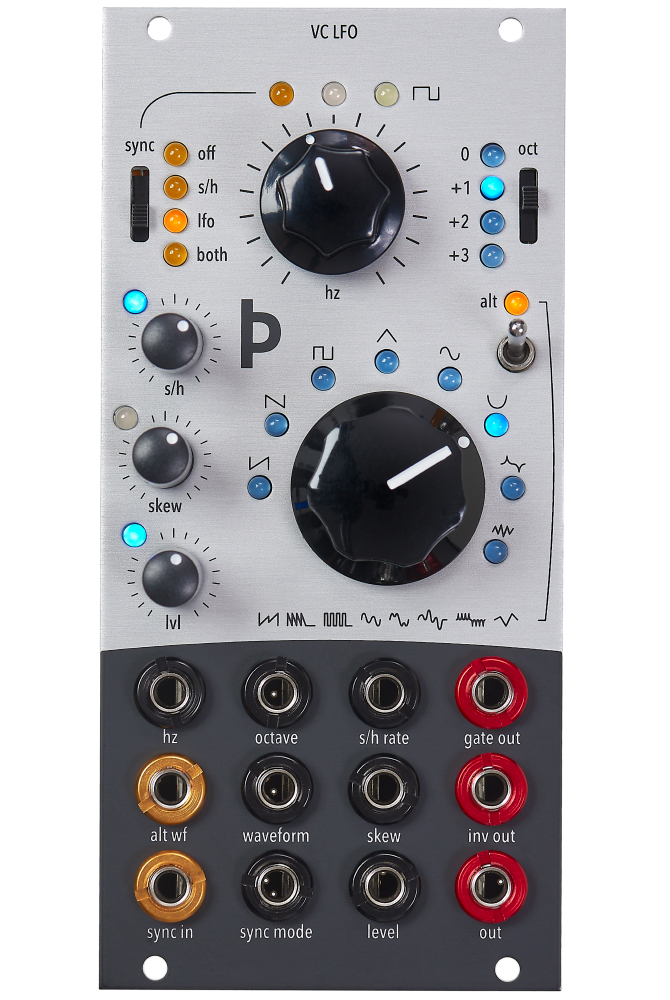 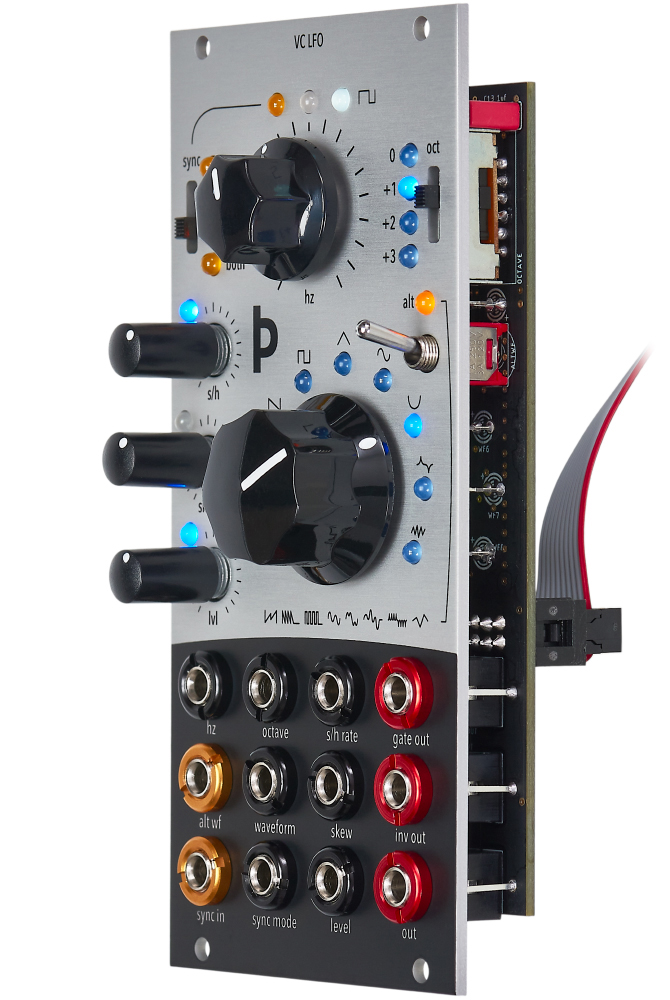 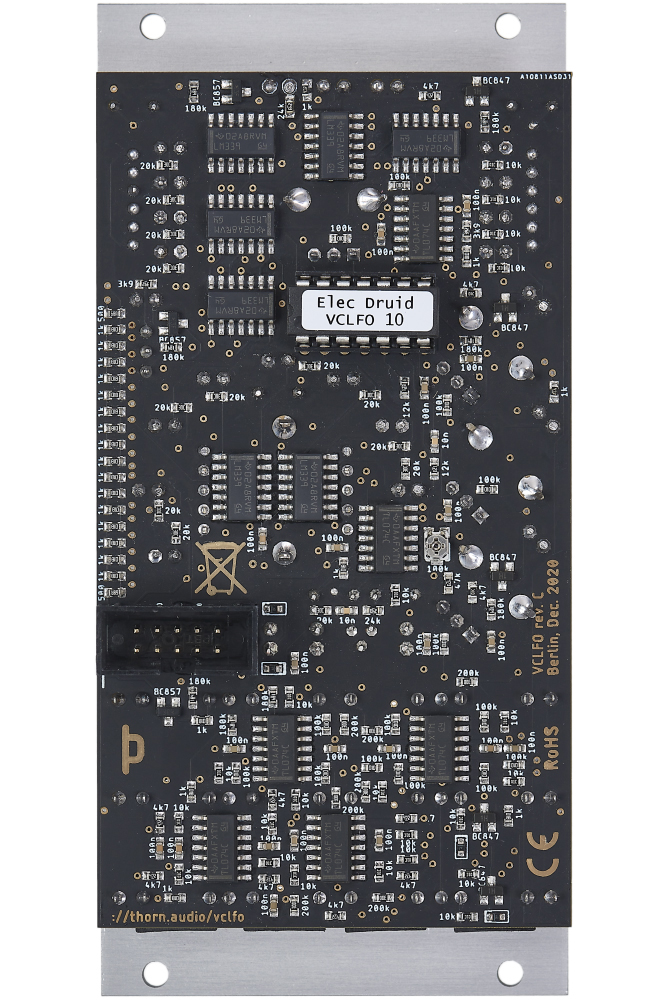